New York COVID-19 State of Emergency and The Services We Provide.

New laws have been established in New York impacting the services we provide to you.  This law was enacted in response to the state of emergency declared by Governor Cuomo concerning the COVID-19 pandemic. This law applies to our residential and small business customers[1].

Below are the provisions of the law:

If you are experiencing financial difficulty due to COVID-19, please call the Fishers Island Utility Company, 631-788-7251.

[1] Small business customer is defined as a business with 25 or fewer employees that is not a : A) publicly held company, or a subsidiary thereof; B) seasonal, short-term, or temporary customer; C) high energy customer as defined by the Public Service Commission; or D) customer has the resources to pay the bill.

The water distribution system on Fishers Island — it’s 22 miles of water mains, control valves and 148 hydrants – needs major renovation. Most of the system’s cast iron pipes are between 100 and 120 years old and increasingly at risk of collapse due to corrosive processes in buried iron pipe. The potential for a collapse is high based on the average pipe age and corrosion observed in samples of pipe. In addition to becoming brittle with age, cast iron mains over time become coated with iron and other minerals, reducing water pressure and flow.

The water system suffers from other constraints as a result of how it was created. Originally, Fishers Island had three systems, operated independently by the East End Water Company, the West Water Company and, at Fort Wright, by the U.S. Army. These were retrofitted into a single system over time as the demands for water services on Fishers Island grew beyond what was envisioned a century ago.

Fishers Island is not alone. Water systems across America, built early in the 1900s, face these issues with water main networks. In 2017, the American Water Works Association estimated that $1 trillion of investment is needed nationwide to renovate the country’s water distribution systems. The costs will only increase over time. Deferred renovation leads to greater system deterioration and requires expensive, crisis interventions.

The good news on Fishers Island is that plentiful, quality fresh water sources at Middle Farms have been secured for the foreseeable future as the result of recommissioning a third well, building a state-of-the-art well filtration plant and, as a back-up, taking steps to better protect the area’s aquifers and the interconnected reservoir ponds. With continued responsible stewardship of the island’s aquifers, the community should not face the hazards of saltwater incursion or toxic chemicals and waste leaching into its fresh water sources.

We now have a golden opportunity to ensure the reliable delivery of water over the next 100 years from Middle Farms to the rest of the island for both potable (drinking) water customers and the fire protection infrastructure needed by property owners. In the process, much can be done to rectify the constraints of the distribution system pieced together as the three separate water systems were interconnected and water reservoirs at the West End and Fort Wright were abandoned. The system can become first rate, with properly integrated engineering design and planning.

As a first step, an engineering study and a map of the water distribution system were completed during the fall of 2019. (Some may recall the blue lines and flags on the main roads and adjacent rights-of-way.) As a next step, the Water Company will be developing a Master Plan for the renovation. This will require a detailed engineering design for precise routing of the new mains and for breaking the construction work into manageable phases that can each be completed between summer seasons over a number of years. For example, Phase 1 of construction will likely be a new trunk main, including new hydrants, from Middle Farms to the road intersection by the entrance to the Navy’s Underwater Laboratory, a distance of 2.37 miles. Additional construction phases will follow from Phase 1, continuing west to replace trunk mains on the more densely populated West End out to the Fort area, then east from Middle Farms to the East End and finally renovating lesser loop mains.

During construction of a new main, the existing main will remain in place so that water services are not disrupted. As a section of the new main is completed, it will be interconnected with the existing parallel main. This will avoid disrupting water service. Eventually, the old main will be abandoned and water lines that tap into it will be transferred to the new main.

The new mains will be made of well-proven modern materials that do not corrode. These mains will also be larger than existing mains in order to ensure water volumes that meet the current standards for fire protection. The engineering will address pressure challenges as well.

The engineering design is also needed to refine cost estimates, put the work out for bid and get contractor quotes. But there is no question that the renovation will require a multi-million-dollar investment funded over many years.

As part of the Master Plan, the Water Company is considering how to spread the financing costs of the renovation over time. It is also studying how to fairly allocate the financial burden between water rate payers and property taxpayers. As these aspects of the plan become clearer, they will be shared with the Fishers Island community. To review a copy of Fishers Island Water Works 2018 Quality Report click on the link below.

Watch a video of the new Filtration Plant being installed 7/17/2018.

Tipsheet on your wellness

go to “careers” for job application

Apply in person at the FIUC Main office on Fishers Island 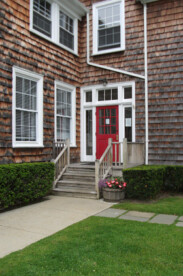 New York COVID-19 State of Emergency and The Services We Provide.

New laws have been established in New York impacting the services we provide to you.  This law was enacted in response to th...

FI Electric Lineperson go to "careers" for job application Apply in person at the FIUC Main office on Fishers Island ...

Phone books are available for pick-up at the Fishers Island Utility Offices, Monday thru Friday, 8am to 4:30pm. WEB white ...